Well, there was also the Adidas Jeans Bern in 2016, but that’s not quite the same thing, colour combination aside.

This 2019 reissue is the real deal though, a return of a shoe first introduced back in the late 1970s as part of the iconic City Series range. This isn’t the last for this year either – more colour variations of recent reissues plus the return of the Adidas London are already in the pipeline for a little later in the year. 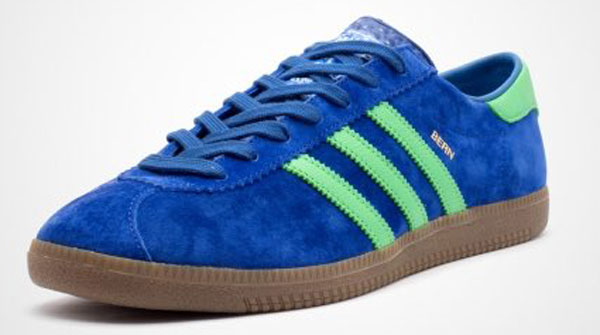 The Bern is a much-loved classic, with a royal blue upper in suede, green detailing, a gum sole and gold branding featuring the Bern name. A ridged tongue finishes things off nicely.

The latest reissue sticks to the original formula as you might expect and will be offered across a number of retailers. Yes, that’s right, you don’t have to join the queue for a single well-known retailer in the hope you might pick up a pair without resorting to eBay.

Previous full City Series releases the year (the Brussels and the Rom) have been available in reasonable quantities if you are willing to hunt around. So I wouldn’t worry too much about stock levels.

The original release was originally 4th May, but that was put back for reasons not fully explained. The new date you need is midnight on 17th May 2019, so stay up late or get up early the next day, as they should still be around. Expect the usual 2019 price point of £89.

Retailers will almost certainly include The Hip Store, End Clothing and Adidas directly.

Update: all sizes are now in stock at the End Clothing website.